The second cross student exchange was hosted by Srednja škola Andrije Ljudevita Adamića in Rijeka and took place from 22nd to 28th of April 2018.

22nd of April 2018
All participant students and teachers arrived at the bus station. Students were picked up by their host families and teachers went to their hotel.

23rd of April 2018
All students and teachers arrived in Srednja škola Andrije Ljudevita Adamića at 9.00 when the Welcome class took place. The project leader Mr. Luka Frlan presented the program of the activities and then students had an opportunity to introduce themselves and to express what they expected from this exchange.
After a short break, the first workshop, led by Mr. Goran Božić, took place in which students learrned how to sing one popular Croatian song called 'Mi plešemo' (We dance). Together with our school band students learned to sing this song and then had some time to sing it in groups and individually. They had a really great time at the beginning.
On the next session, the products of each state member were presented. Most of that products were videos, so students were very proud when they saw themselves in the movies. Final activity of the day was physical education in a sports hall near our school. Students and teachers went there by local bus and were welcomed by Mr. Toni Žitko, who prepared several relay games. Students were divided in four groups and had to finish all tasks in shortest possible time. Afterwards they had a Zumba class led by a professional instructor. Many of the participants felt tired but some of them still managed to play a short football match.
At the end of the day, we all gathered again in the River pub in Rijeka. Geography teacher organized a quiz for all students, divided in eight groups. The quiz was very well organized and at the end of it the school band performed several popular songs, all of participants joined them and had a great time. 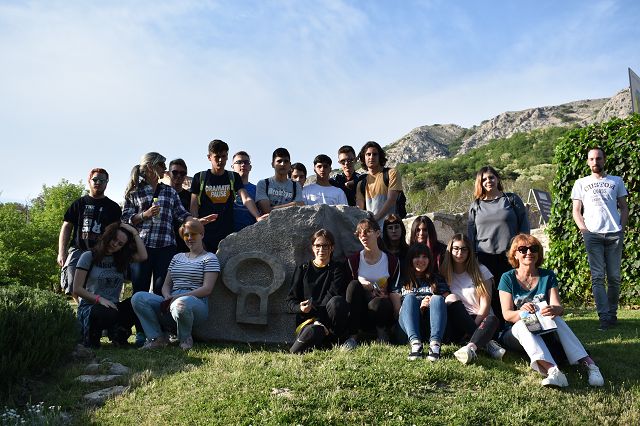 24. of April 2018
The first activity of the second day was classroom immersion – history, named Active citizenship through history. History teacher Luka Frlan briefly explained what it meant to be active citizen in different historical periods and what it means today. The right to vote was stressed as one of the most important features of active citizenship. In the final part of the immersion students express their opinion on the idea that the voting age should be lowered to age 16? They all made posters with the slogans and it was very interesting to see how their opinions differed. This was the only activity in school on the second day because immediately after it all participants went to the County Hall in Rijeka where Mr. Petar Mamula, the Deputy County President, hosted us and supported this type of project. Directly from County Hall we went to visit the island of Krk. First, we visited Njivice, where students, in co-operation with the Association Eko Kvarner, became acquainted with the way in which the association promotes and strengthens the role of citizens in the realization of the constitutional right to healthy environment. After lunch in a restaurant with local food we continued the excursion to Baška, where students had an opportunity to meet the Glagolitic alphabet, which was used in Baška Valley for centuries. In the free time students had also an opportunity to swim in the sea. At the end of the excursion, we went to the City of Krk, where Mr. Patrik Krpan explained us some interesting facts about the history of the city. 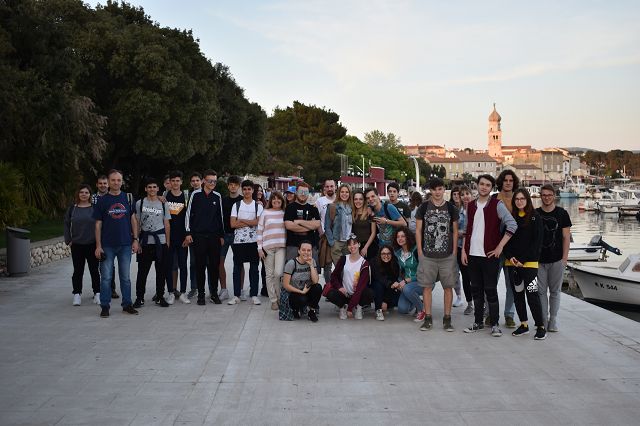 25. of April 2018
On Wednesday morning the program started at 9.00 with language workshop that was divided into two parts. During the first part of the workshop, together with the English language teacher Mrs. Dorina Badurina, students played an interactive Kahoot quiz named How much do you know about languages. Students were divided into 8 groups of 4 students and every group consisted of several Erasmus students from different countries. The quiz lasted 45 minutes and students demonstrated good knowledge about European languages. The second part of the workshop was organized by our Croatian language teacher Mrs. Jasmina Čavrak, and was arranged as a writing session. Students were given clay plates on which they had to carve the phrase Lets build Europe together using Glagolitic script. The aim of the workshop was practical usage of Glagolitic alphabet to produce pieces of art that the students can then take home as a souvenir from Croatia and a memory of this particular Erasmus+ exchange held in Croatia.
After the break, another workshop took place, this time led by our associates from Faculty of Humanities and Social Sciences, Department of Education, Mrs. Nadja Čekolj, Bojana Vignjević and Ivana Miočić. The name of the workshop was Interculturalism matters and it dealt with recognizing stereotypes and potential barriers in intercultural communication. The topic stereotypes is dealt with by using humour  as one of the forms of human communication. In this part of the workshop called “The competition of Eurojokes”, the participants explored their own sense of humour through telling, reading and listening to different jokes as well as through discussion about whether humour encourages stereotypes or vice versa. The second part of the workshop called “The Island” focused on intercultural communication and the potential barriers for establishing effective intercultural communication. The participants take on different roles and try to establish communication in a seemingly difficult situation where they portray a meeting of people not speaking the same language, having different attitudes, emotional and social competencies.
In the afternoon, Mr. Luka Frlan guided a short tour of Trsat, the old part of Rijeka. Students arrived on Trsat, located on a hill, via 561 stairs. After a short period of relaxation, they could see the Church of Our Lady of Trsat, visit a medieval castle and hear some interesting historical legends. In the end, we had lunch in a local pizzeria and students were free to go and spend some more quality time with their host families. 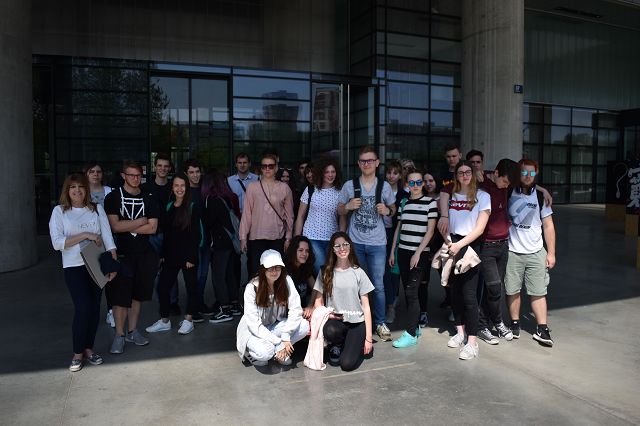 26. of April 2018
Thursday was reserved for a whole day trip to the Croatian capital Zagreb. After a two-hour bus drive, we visited the European Commission Representation Office in Croatia, whose activities on education and training are designed to promote growth and jobs in Europe and contribute to the development of skills for the labour market. The employees showed us a short presentation of advantages and privileges of the EU citizens.
Our second destination was the Museum of Contemporary Art, where students had an opportunity to see an exhibition on the Role of women in modern society. There were many interesting pictures and statues where students were encouraged to participate actively by reading and expressing their opinion on particular exhibits. In the final part another workshop was held in which all participants could write the problems of modern society and try to give their solutions to them. In the afternoon, the short visit to the city centre was organized where we could see buildings of Croatian parliament and Government together with the most important tourist sights in Zagreb. After that students had some free time for shopping and afterwards we went back to Rijeka. 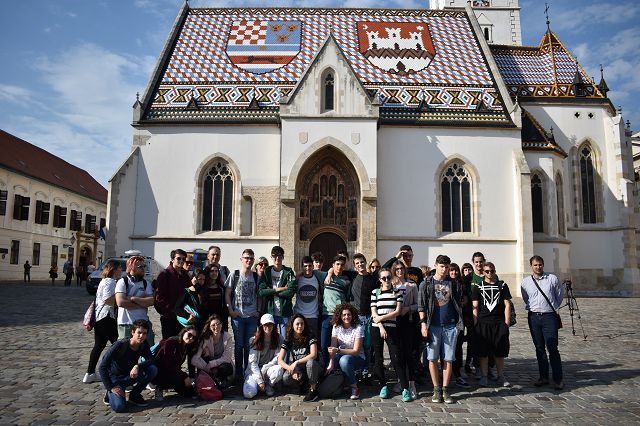 27. of April 2018
The final day of our 2nd exchange started with the final IT class, led by our IT teacher Mrs. Marina Mišura. The idea behind this workshop was to encourage students to use their smartphones for educational purposes. At the beginning of the workshop students connected to schools Wi-Fi and downloaded one of many Croatian tourist guides that can be found on App Store or Google Play. Students were divided into groups of four and each group got one town in Croatia. The eight towns that were picked are all towns with rich history and important landmarks. The result is a map of Croatia complemented with information, pictures and interesting facts about these eight cities.
After the workshop everyone was ready for a farewell event in the City Hall of Rijeka. Many other students from our school and their parents joined us in this special occasion. The Erasmus+ students presented all activities during this week and received their certificates during the Event.
The visit to Opatija was also organized immediately after the Farewell event. Students spent a wonderful afternoon in a small touristic city also known as the ‘Pearl of the Adriatic’. Finally, the farewell dinner took place in the restaurant Mornar, near the sea port, while afterwards students and teachers went to Onyx Club, where they could relax and have fun after a wonderful but busy week.

28. of April 2018
In the morning hours students gathered for the last time and prepared for the departure. Many of them were very sad because they had made new friendships and it was very difficult for them to say goodbye. However, they all agreed to stay in touch and to meet again.