The first cross student exchange was hosted by Stiftsgymnasium St. Paul in St. Paul im Lavanttal and took place from 18th to 24th of February 2018.

18th of February 2018
All participated students and teachers arrived and picked up by the hosting families. 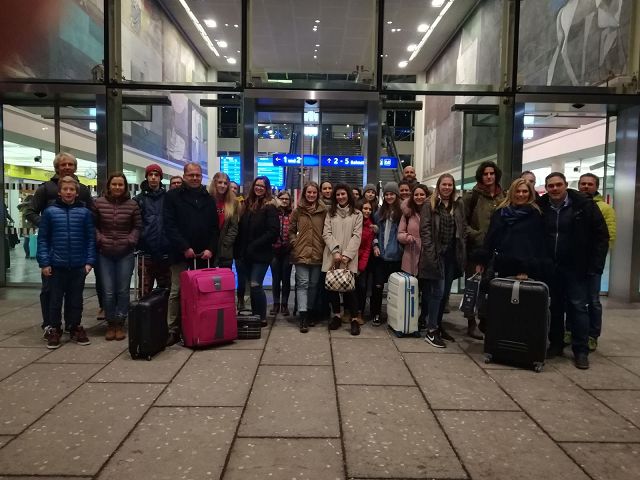 19th of February 2018
All members of the Erasmus+ program arrived at Stiftgymnasium at St. Paul. The Headmaster Father Thomas Petutschnig had a welcome speech and he pointed out the benefits for the students that participate to an Erasmus+ project. Then a teacher of each school had a small speech focusing on the aims of the forecoming activities during the exchange. The coordinator Prof. Giovanni Santoro presented the topic of the exchange and the program of the activities to the students. Then the students performed ice-breaking activities with Prof. Rosemarie Pollanz and Prof. Lisa Baumgartner and they had their first experience as a group. The teachers had a guided tour of the hosting school and they have been introduced to other staff members. 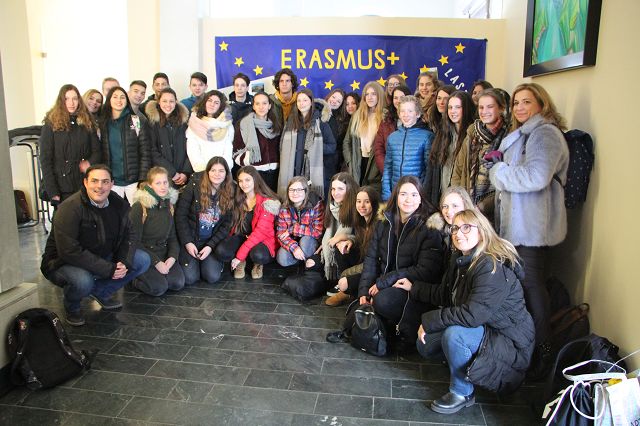 After the break, all students attended a class of musical education where they demonstrated representative dances of each country. They learnt to sing “We are the world” with Prof. Christiane Pommer and then they split into teams: a team wrote new lyrics for the song, another team created choreography, painted a poster and a RAP version of it. Each team presented its product to the others.
The lunch break was also an interesting activity for the students from many perspectives. They had the chance to speak and know each other more but also for the hosted students having lunch at school was an unknown experience.
During the final class students attended physical education and they played basketball. They divided into teams and under the supervision of Prof. Florian Rabensteiner and Prof. Iris Lammer they had a small tournament. After all, sports have the power to unite people of different nations. The first day ended with the welcome dinner, beautifully decorated by Prof. Dr. Rudolf Freisitzer. It was a great owner also the presence of Father Maximilian Krenn the Administrator of the hosting school.

20th of February 2018
The students visited the chocolate factory of Zotter and they had the opportunity to taste different flavors of chocolate and learnt about the process of making them. After this sweet experience, a guided tour to the city of Graz by the two Prof. Andrea Pötsch and Prof. Katja Baumgartner was an amazing experience been introduced to the post characteristic places of the city. 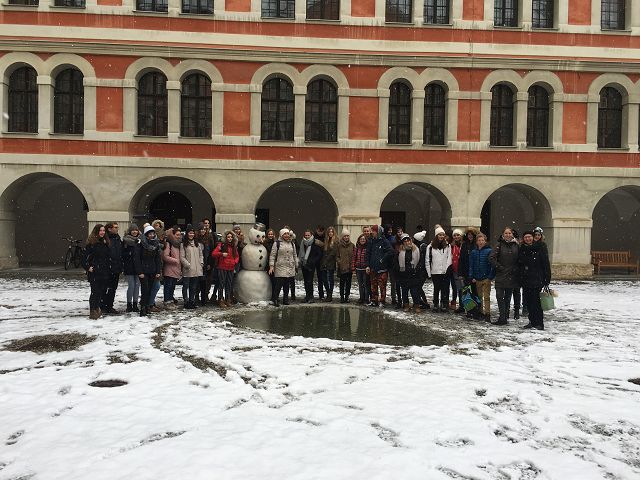 21st of February 2018
This day began with a classroom immersion of Latin and Greek concerning the Erasmus+ topic by two teachers Prof. Papachristou Maria (Greece) and Prof. Karin Pichler (Austria). The students divided into two teams (Greek – Latin). The students, who did the ancient Greek class, had the opportunity initially to be presented the ancient Greek legal system and then they formed two teams of role-playing. One team represented the trial of a murder with the constitution of ancient Greece and the rules. The other represented “Antigone”, where they debated about if it was right or not for Kreontas to decide one of the two brothers to be buried formally and the other to be left unburied.
Students who attended the Latin class have been taught about the forms of the political system in ancient Rome and they also divided into two groups. One group has designed posters where the political organization has been presented with the form of a pyramid. The other team has created a role playing game of a barber who accidently killed a slave because the ball of the children who played around hit the knife. The slave owner required compensation from the barber who claimed that wasn’t his fault. An advocate was called in order to provide an acceptable solution for all involved members.
The second activity involved the conference with an expert, where Dr. Johannes Maier (head of the EU Coordination Center of the Government of Carinthia) explained to the students the functions of EU, the form, the decision-making process etc. After his introduction students got involved into a conversation with many questions about the EU and the processes within EU. The conversation was particularly lively and the students very active proving their interest on the topic of the Erasmus+ program. Among others topics during the conference they have discussed about BREXIT, the name of FYROM now that negotiations are taking place, the economic crisis in Greece and the consequences of a possible exit of a member of EU etc. 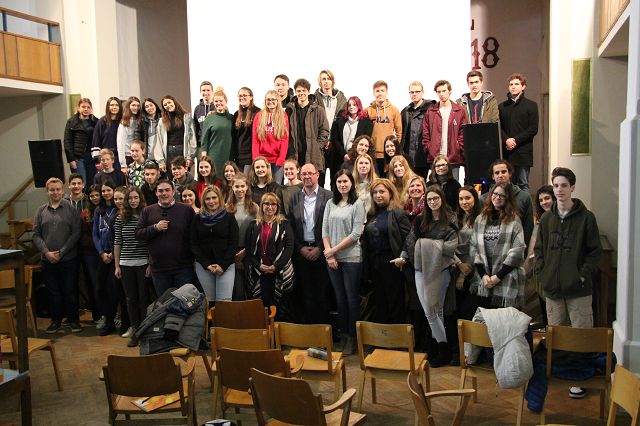 Foreign languages was the class that students attended after the break. They had the chance to write words concerning the topic of the exchange in their mother tongue initially (2 groups of Austria, 1 Italian and 1 Greek). Then they were reformed into 4 mixed groups of 8 students read a specialized text (in English) on the project and underlined the most important words. Finally the students had to compare and sort the words with the same meaning into four different columns: English, Italian, Greek and German creating a word bank.
After the lunch break there was the final class of the day concerning History and Geography with Prof. Rosemarie Pollanz and Prof. Bernd Locker. Students have formed different groups and they made presentation with topics given by the teacher concerning also the topic of the exchange. These presentations are shown by the students to the Assembly in the festival room and discussed about each one with the teacher. At the same time the visitor teachers had a tour at the monastery of St. Paul, where they visited the monastery but also the library with very impressive and aged books written and designed by monks.

22nd of February 2018
This is the day of the second excursion, all participants travelled by train to Klagenfurt. They visited the Government of Carinthia and they had a guided tour in the EU coordination center. There they had the opportunity to perform a role play about the council of Carinthia about the speed limit around the lake. Students prepared arguments for the debate and represented members of the council. At the end the Governor himself Peter Kaiser met the students and teachers and talked with them, while at the same time he had the willingness to have a group photo with all participants. The visit to Klagenfurt ended with a guided tour at the old city and free time for lunch and shopping at the town. 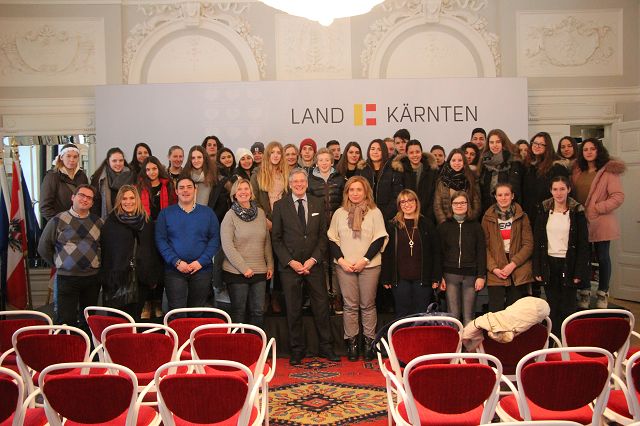 23rd of February 2018
The organized classroom immersion concerned the use of software tools presented by two ICT teachers: Prof. Dr. Eleni Kokkinou (Greece) and Prof. Lena Tomitz (Austria) and involved all 32 students. Students have been taught how to use Joomag to create booklets, Animoto to create impressive video presentations and software created word clouds (from the word bank of the foreign languages class). This way, they have digitized all the material produced during this week and further more. The project evaluation took place also in the Computer Lab, presented by the project coordinator. Specifically, the outcomes were: 3 Animoto, 7 booklets and 2 word clouds and the evaluation. The students finished everything needed for the farewell event and the outcomes of the week. The farewell event took place in the festival room of the school where all project outcomes presented to all participants staff, hosting parents, students and teachers. After the dinner students enjoyed the “Erasmus + Disco” in the festival room of the school. 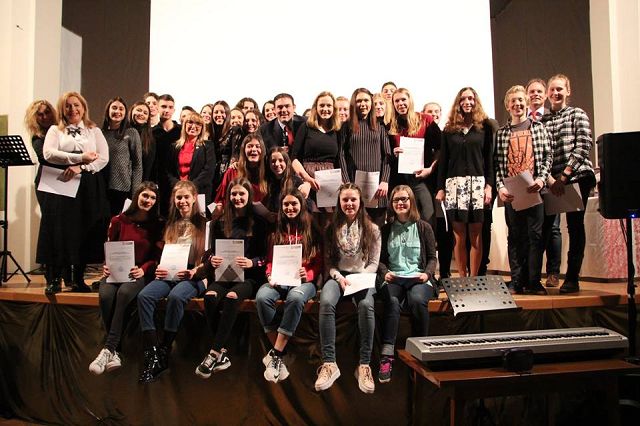 24th of February 2018
This was the departure day of the participants, very sensitive and emotional day since most of the teachers were deeply upset. A nice enclosure was the group hug made at the airport that brought tears to everyone’s eyes. The aims of the Erasmus+ project have been accomplished since strong bonds have created between the participants and promises of future visits. 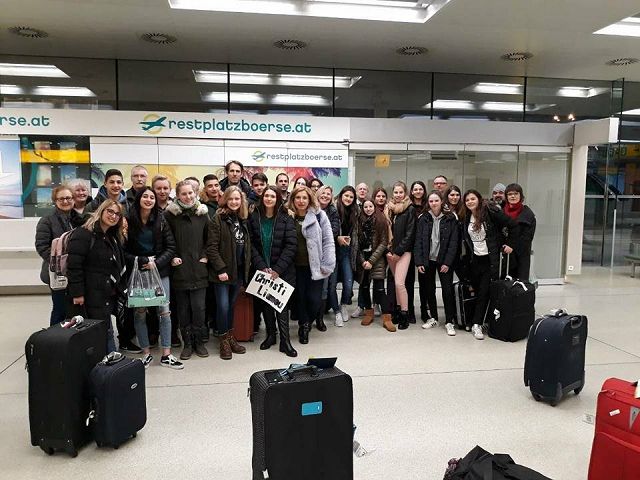